We were invited to a home in Whittlesea, Peterborough to provide a quote to remove some French Doors and large window then install a large 4.5m white aluminium bifold door. Between the French doors and window was a centre element of brickwork. To remove this brickwork a large steel lintel would be required as an active support for the tiled roof.

Once we were offered this double glazing contract, we brought in our structural engineer to calculate the requirements for the steel lintel. Calculations were taking measuring the room dimensions, the wall dimensions and thickness, also the roof pitch.

The client went through our catalogue and decided to go for the 5 door white aluminium door. They went for the 5 door instead of the 4 door as this offered the ability for the single opening door to open independently as a traffic door, but with the ability to slide with the remaining 4 doors to the right providing a complete opening.  They also opted for the stunning chrome handles and locks. 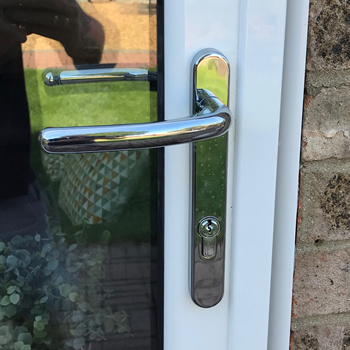 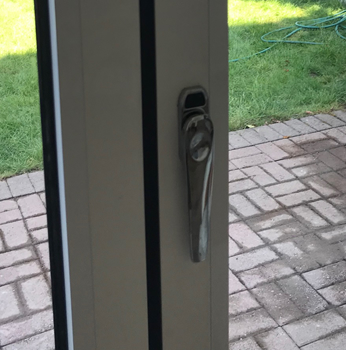 Many people have the misperception that aluminium bifold doors have security issues as they have so many doors. This is an incorrect statement as bi-fold doors are installed with a multi-point locking mechanism system as well as a hidden inline tracking system. This prevents the intruder from lifting up an individual door and then removing it from the track. Each door is then attached via a concealed gearing system within the bottom track. Therefore to remove a door then the gearing would need to be removed also, not forgetting the steel pins too. All our bi-fold doors are internally beaded. This prevents the intruder from removing the glazing from the outside. The glazing is also double glazed providing that additional protection.

In order to install a cavity steel lintel the upper brickwork needed to be removed. We also needed to remove a few layers of roof tiles and drainage system, so that we could place the steel lintel in place. To allow our door installers to complete this job safely, various roof supports needed to be put in place to hold and support the roof from collapsing when the wall gets removed. The lintel we opted for was sufficient in calculation by our structural engineer to be install into the 50mm cavity then sit onto the upper part of the bricks. 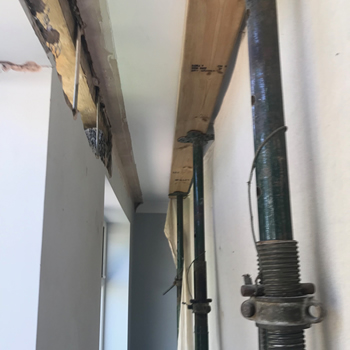 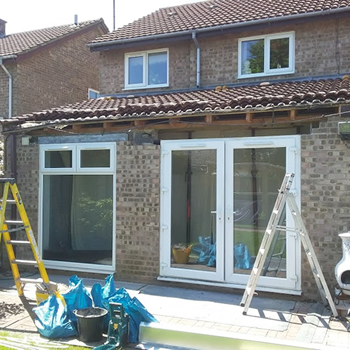 Once the aluminium bi-fold door was fully installed and working correctly, then the upper brickwork was then replaced. The roof tiles were then replaced and the drainage system was also fitted.

The inside of the property where the steel had been installed required plastering and made good. Not forgetting the uneven flooring where the previous brickwork was. Once this was complete then a wooden flooring g strip was laid matching the existing flooring.

Fortunately our bifold manufacturer had completely assembled the door frame and sills were fully fitted. This saved a lot of time for our door fitters. The sills were installed by the manufacturer applying a bead   of silicon to the rebate of the sill and door then both parts were pushed together. Then pilot holes were applied.

The frame was then guided into the opening ensuring that the head track was in the correct position. Holes were then applied with the depth of at least 40mm through to the lintel from the bi-fold door frame. 5mm packing was then placed into position where the screws would be fixed. This packing prevents over tightening and stops the 5mm expansion gap from being lost.

A spirit level was then used ensuring that the head and sill are level. Then the vertical frame was then also checked ensuring it was also level which would prevent future jambs!

The aluminium frame was now completely secured with packers, drill holes using an 8mm bit to 70mm depth to either side of the frame.

The sill and head were then fixed by drilling through the frame then secured with large screws. The head was secured by starting from the two outer fixings then screws were tightened up. Once the frame was completely level and secure then the hinges were attached. Exact positioning was necessary so that the aluminium bi-fold door would work correctly. Pivots were also installed to the upper track. 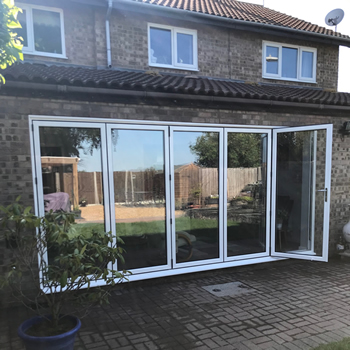 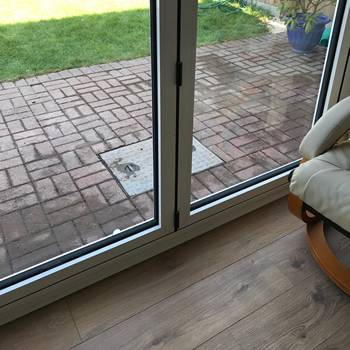 The inside of the property where the steel had been installed required plastering and made good. Not forgetting the uneven flooring where the previous brickwork was. Once this was complete then a wooden flooring g strip was laid matching the existing flooring.

About the Author: Admin 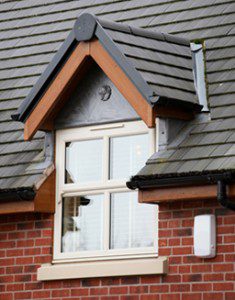